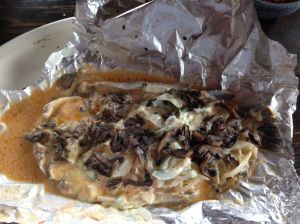 Here’s the strangest adventure yet. On Friday night, I was out in the streets taking pictures when I ducked into a café to borrow the wi-fi and check messages. Just as my tea arrived, Rubi and Naiely, asked if I was available to chat and to help them with their English homework. They explained they would have to videotape my responses to their questions regarding my age, profession, etc. as well as some things about Oaxaca. I agreed. They completed the interview, packing away their notebooks and workbook, and stayed chatting with me. They showed me pictures of where they were originally from, the Isthmo region of Oaxaca. Rubi showed me a photo of her boyfriend, a police officer. The conversation continued as we got acquainted.  They even let me know they’d been following me for blocks — after they were turned down by an Argentinian couple.

We decided that it would be a good idea for us to meet on Saturday at 12:30 at the same café. I was skeptical that they’d come, but I arrived at 12:15. Just as I was about to text M that I’d been stood up – again, Naiely arrived. Rubi came soon after.

So they told me I needed tennis shoes and a heavier sweater and my rain gear and we were off to catch a bus to a taxi to the sierras, a place I had not mentioned on my list of places in and surrounding Oaxaca I’d seen.

Rubi and Naiely were practicing English as we went:

I got up. I ate breakfast. I brushed my teeth. etc. They asked me to list my morning routine. I figured it was a Spanish test, but they wanted to hear it in English.

Off the bus, we walked to a colectivo taxi stand where four men were playing an intense card game, but our driver had to break away because the two people waiting now had some fellow passengers. The six of us climbed aboard, the rain now pouring.

We arrived at Ixtlan de Juarez, a small mountain town. More specifically, we arrived at the Linda Vista restaurant.

The menu had only one entrée: Trucha (Trout). And, this restaurant cultivates the trout. While we waited for the rain to die down and for the view to clear, we had three large bowls of café de olla (my first coffee in days) and pan de mantequilla (butter bread).

We chatted more as we waited, and then we headed out in our raingear to catch the trout we would eat. The waiter gave us a colander, a giant trash bin, and a heavy (I cannot emphasize this enough) net to catch our lunch. Naiely and I were unsuccessful. After extraordinary effort, Rubi caught two. And, then we called in the expert; the waiter, in less than a second had one (that he warned was too big and would be more expensive), so he just scooped back in for another. (I swear I’d starve if out in the wild; I mean these fish were in pools!)

The next step in the process involved the waiter beating our lunch to death with a wooden plank and then gutting the still squirming creature. A fast process, not as alarming as I’d anticipated.

We returned to our table, soaking wet, cold, and still laughing. The waiter asked how we’d like our trout prepared. There are five or six preparations. Two include the extraction of the spine. Because I am not usually a fish eater, I opted for one of the “spineless” presentations. I had the trout with mushrooms. It was sort of stuffed/covered with mushrooms, quesillo (Oaxacan cheese), onions, garlic, and more garlic – and a kilo of butter. It was truly delicious, but the twisty highway and the fact that I was still recovering meant that I enjoyed only a sampling of the poor guy.

The rain cleared as we were eating; we had a whole view of the city of Oaxaca below. And, my new friends decided to add a bonus section to their video: our adventure. (Clearly, they want an A+.) They interviewed me some more about whether I have ever been to a restaurant like this. I couldn’t think of anything resembling it. They asked me if I’d like to go on another adventure. I agreed. (We are going to a neighbor’s child’s first communion fiesta next Saturday.)

The hardest thing about not having a car and taking a taxi to a sort of remote place is that it takes awhile for another to come by. But another did, and we flew down the twisty mountainside in the rain with such speed that we arrived in just over half the time it took to ascend.

I am reminded, time and time again, it is usually wise to accept invitations for adventure.

(Ok, mom, the other preparations are: bbq, fried, in paper, in chipotle sauce (mmm Naiely had this), in garlic sauce, and Mexican style (I assume with chiles and tomatoes).) 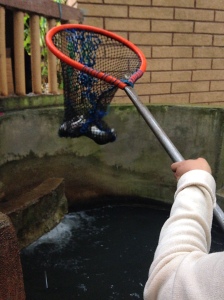