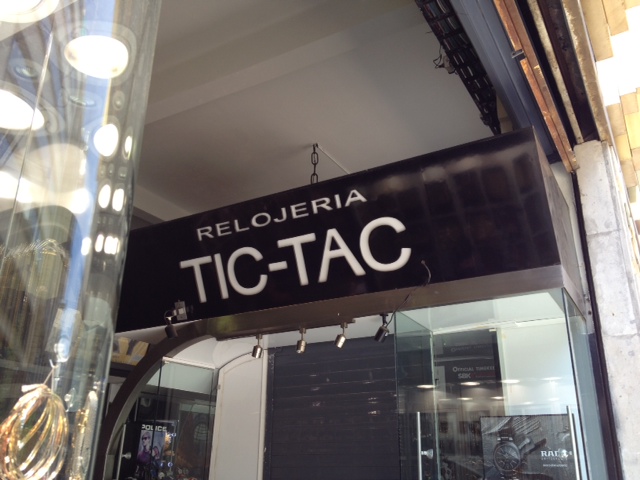 The kids in Tlacochahuaya call Spider Man Speeder Man because the “I” sounds like an “e” in Spanish. I mentioned that when I went to see The Guardians, it took me a half an hout to figure out that “Peach” was “Pitch.” I only got it when they said “Peach’s” last name. So, of course animal sounds and other onomatopoetic sounds are going to vary. I already know animal sounds do, depending on the language the animal lives in… Dogs in the US say, “bow-wow, arf, ruff;” they bark. Dogs in Spanish say, “guau guau.” Baby chickens peep. In Spanish they chirp, “pio pio.” Roosters “cock-a-doodle-doo” while their Spanish-speaking cousins: “kikiriki, ki-kiri-ki.”

This is why I was so delighted to see that the watch shop is not called Tick Tock as it would be in the US. It is called Tic Tac, and the Tic sounds more like teak. Next trip, I’m going to spend more time looking for more of these sounds and how they are translated.