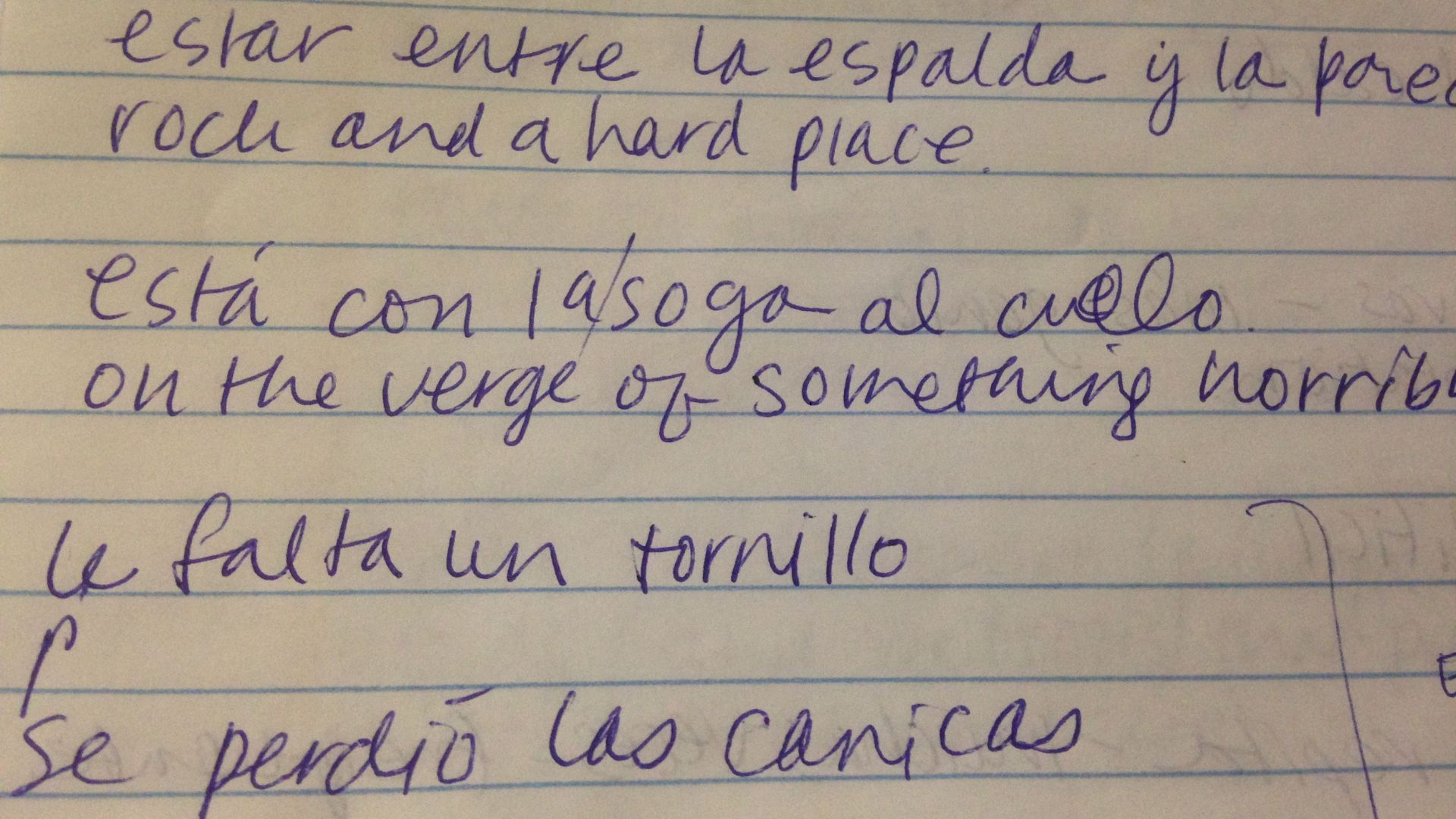 In one Spanish class, I am writing poems. In the other I am asking questions and carrying on a conversation about politics, culture, and history.

My most recent round of questions had to do with what I call gasoline for my motorcycle: idiomatic expressions.

We started with four I had overheard in the Home Depot parking lot. The first is: Nací en el año del caldo. It means: I am old. I was born in the year soup was.

The second: Me importa un pepino (un comino, o un rabano). In other words, I could not care less (it is as important as a cucumber, or cumin, or a radish).

The third has to do with the men calling eggs “Blanquillos” instead of “huevos.” I couldn’t understand why they would associate eggs with white, blanco (instead of the delicious brown ones), my teacher reminded me that huevos are associated with testicles and that they needed to find a way to refer to eggs politely; blanquillos is the solution.

Finally, the last one caused the most confusion in the parking lot: Me cayó el payaso. Literally this means a clown fell on me. However, it is a way to describe that work didn’t get done. I and my english speaking students thought this might be equivalent to “clowning around.” A man from Guatemala, where they have many different idioms, said it just didn’t make sense.

My teacher said another almost equivalent to the clown one is: “Me atraparon con mis manos en la masa.” (You have caught me with my hands in the masa.) This is our equivalent of fingers in the cookie jar.

“Cada dos por tres” is two out of three times or: frequently.

“Cortor por lo sano” is to cut off something for my (physical or mental) health.

While something might cost an arm and a leg in English, it costs “an eye from the face,” (un ojo de la cara) or the pearls of the virgin (las perlas de la virgen).

There are also high prices to pay for some solutions. For example, “Me salío más caro el caro que las albóndigas” (literally translated: the broth is more expensive than the meatballs).

I think“”echarle mucha crema a los tacos” (to throw a lot of cream on the tacos) is a cosmetic response much like putting lipstick on a pig.

“Dar en el clavo” is similar to our hit the nail on the head, but there is no hitting or head. Our version seems a more violent way to refer to precision. We also both dot our I’s, but in Spanish, it is “poner los puntos sobre las íes.”

We are between a rock and a hard place or our back is against a wall. In Oaxaca, they “estar entre la espalda y la pared” which is to be between the back and the wall.

A good insult for someone you despise might be that she is a zero to the left, in other words less than zero, a negative number: “ser un cero a la izquierda.”

There are many sayings for one who is crazy. Several involve marbles and screws as do some of ours. “Le falta un tornillo” is to be missing a screw. Se botó la canica is to have a screw thhrown out. And the list continues. You can also lose your stirrups (footing or balance): “Perder los estribos.” This suggests an uncontrollable madness.

“Hacerse de la vista gorda” is a way to have seen something (perhaps a married friend with her lover), but to pretend not to see it. This is often related to people who permit/tolerate/ignore political corruption. By contrast, you might put your finger in a bedsore: “poner el dedo en la llaga.” This is a postive when someone is willing to say what is right although it causes pain. It is precise and painful for listeners. We also talked about opening “la caja de Pandora,” Pandora’s Box.

“No te andas por las ramas” (Don’t walk through the branches) means to focus on the important things, not the superficial ones. Speaking of trees, you should avoid asking for pears from an apple tree, asking for the impossible, “pedirle peras al olmo.”

When hit in the head, Oaxacans, like Californians, see stars (“ver estrellas”). However, while we might have the bull by the horns, they take the pan by the handle (“tener el sarten por el mango”); this does seem more of a display of control.

When you are done with something (including an action), you let it flow (like water flows). The whole phrase is: “Agua que no has de beber, déjala de correr” or (water that you do not have to drink, let it run).

A reminder to be humble and avoid exaggeration: “Ni tanto que queme el santo ni tanto que no lo alumbre” (A saint will neither burn nor shine).

And a phrase that seems to speak to Murphy’s Law (La Ley de Murphy) as much as the presence of evil in the world: “El hombre pone. Dios dispone. Llega el diablo y todo discompone.” Man puts things here. God disposes of them. The devil arrives and everything decomposes.

In the end, I shared the dog ate my homework, the cat got my tongue, and butterflies in my stomach. Apparently, love is the main reason one would have “mariposas” butterflies in her stomach in Oaxaca.