I have shown you around Tlacochahuaya a bit in the past. However, yesterday as we had class out on the lawn, I was again impressed by the mix of the old and new here and what a beautiful setting this small town is. Seemingly always on the verge of storm, the sky is captivating. The streets are filled with livestock, motos, taxis, and trucks as if it is safe for all of these things to mix, and it appears to be.

At four, a tiny man in a brown shirt and cowboy hat herds his livestock behind a blue door; he has a mean stick and a harsh voice. At five, the church bell is invariable a chaos of noise for nearly five minutes; we push on with our lessons, yelling out questions as the students practically scream their responses.

Yesterday was particularly unusual. A local troublemaker came by, drunk and disorderly. Attempting to crash our classes, he insisted one of the students had stolen one of his sandals. I should have known to put my shoes back on at a certain point, but I was too slow. He jumped into my sandals, stealing them for a trip to the store. I protested vociferously, and he finally relented. The children asked how do you say: drogadicto chavo in English, and I offered: “Drug-addicted dude.” We could now diagnose him in at least two languages.

Although he persisted throughout most of the two hours, like one of the skinny dogs that often invade our classes (and while I wanted to knock the fleas right off him), we all maintained a sense of decorum at the same time protecting ourselves. At one point he asked my name, and I offered, George. The students quickly realized my tactic and adopted disguises of their own; Diana was Laura. Gustavo was Franco, etc. Giggling, we greeted each other as if we were meeting someone new. 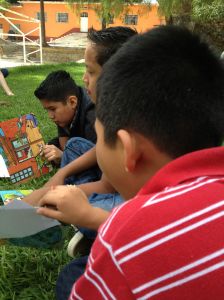 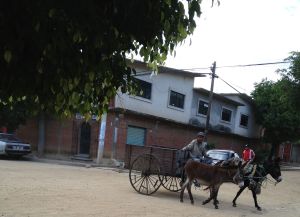