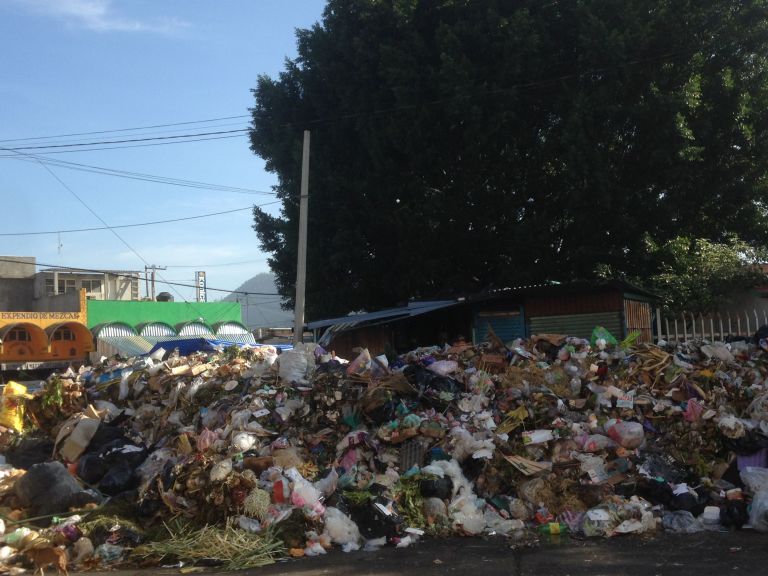 It is Saturday before 8AM, and Miguel is knocking at my door. I am only half-dressed and reading The New York Times to get my daily dose of English before I head to the intercambio at the library.

When I finally emerge from my room, Mari and Miguel laugh at me, how tired and disheveled I look.  Then, Miguel says we are going to the Mercado de Abastos, a place tourists are warned not go, a place known for pick-pockets and surprised stares.

I ask for five minutes to pull on a pair of jeans and brush my teeth. I don’t want to carry anything, so I stuff a coin purse, keys, and my phone into my pockets. I am so out of it, I unintentionally tuck my back-up phone into my bra.

I jump into Miguel’s tiny black car with his decal of Jesus wearing a crown of thorns on the passenger-side window and we are off to the market.

Because it is early for most of Oaxaca, we find a parking space with ease and begin to search for a taxi driver who can deliver me to San Juan Teitipac in the afternoon.

We talk with Pedro, someone from Miguel’s town, and he suggests I meet him outside of a chocolate mill on a street off of the zocalo at 3:30PM. Miguel does not like this plan; he thinks too much can go wrong. Pedro is not going to convince him otherwise, so we skip the line of taxis (though I promise I know where it is now), and we ask around for an area called el cajon where the afternoon taxis meet.

We roam through the aisles of the market through the various sections: clothing, beans and seeds, vegetables, flowers, and so forth. The engine of of commerce is still warming up.

Miguel tells me where to buy the best empanadas. We are both getting hungry.

Before I see it, I smell it.  Still walking, I pull my shirt up to my nose. I put a hand over my mouth. I look down and see an entire discarded crab at my feet and other garbage. We round a corner, and their is a garbage heap reminiscent of the dump.

I start to double over, a quiet gag. Miguel who has been leading the way, turns around. He can’t believe what he sees. He asks: “Seriously?” Then he seems to catch what I have and has to smother his own inclination to retch.

We walk faster. Once the air is clear, Miguel laughingly reports that he’s no longer hungry. We also still don’t have any sort of a plan.

He shows me how to take a bus back to the posada, and I smile all of the way home for all of the adventure one can have before 9:30AM.

Sarah Cynthia Sylvia Stout
Would not take the garbage out!
She’d scour the pots and scrape the pans,
Candy the yams and spice the hams,
And though her daddy would scream and shout,
She simply would not take the garbage out.
And so it piled up to the ceilings:
Coffee grounds, potato peelings,
Brown bananas, rotten peas,
Chunks of sour cottage cheese.
It filled the can, it covered the floor,
It cracked the window and blocked the door
With bacon rinds and chicken bones,
Drippy ends of ice cream cones,
Prune pits, peach pits, orange peel,
Gloppy glumps of cold oatmeal,
Pizza crusts and withered greens,
Soggy beans and tangerines,
Crusts of black burned buttered toast,
Gristly bits of beefy roasts. . .
The garbage rolled on down the hall,
It raised the roof, it broke the wall. . .
Greasy napkins, cookie crumbs,
Globs of gooey bubble gum,
Cellophane from green baloney,
Rubbery blubbery macaroni,
Peanut butter, caked and dry,
Curdled milk and crusts of pie,
Moldy melons, dried-up mustard,
Eggshells mixed with lemon custard,
Cold french fried and rancid meat,
Yellow lumps of Cream of Wheat.
At last the garbage reached so high
That it finally touched the sky.
And all the neighbors moved away,
And none of her friends would come to play.
And finally Sarah Cynthia Stout said,
“OK, I’ll take the garbage out!”
But then, of course, it was too late. . .
The garbage reached across the state,
From New York to the Golden Gate.
And there, in the garbage she did hate,
Poor Sarah met an awful fate,
That I cannot now relate
Because the hour is much too late.
But children, remember Sarah Stout
And always take the garbage out!