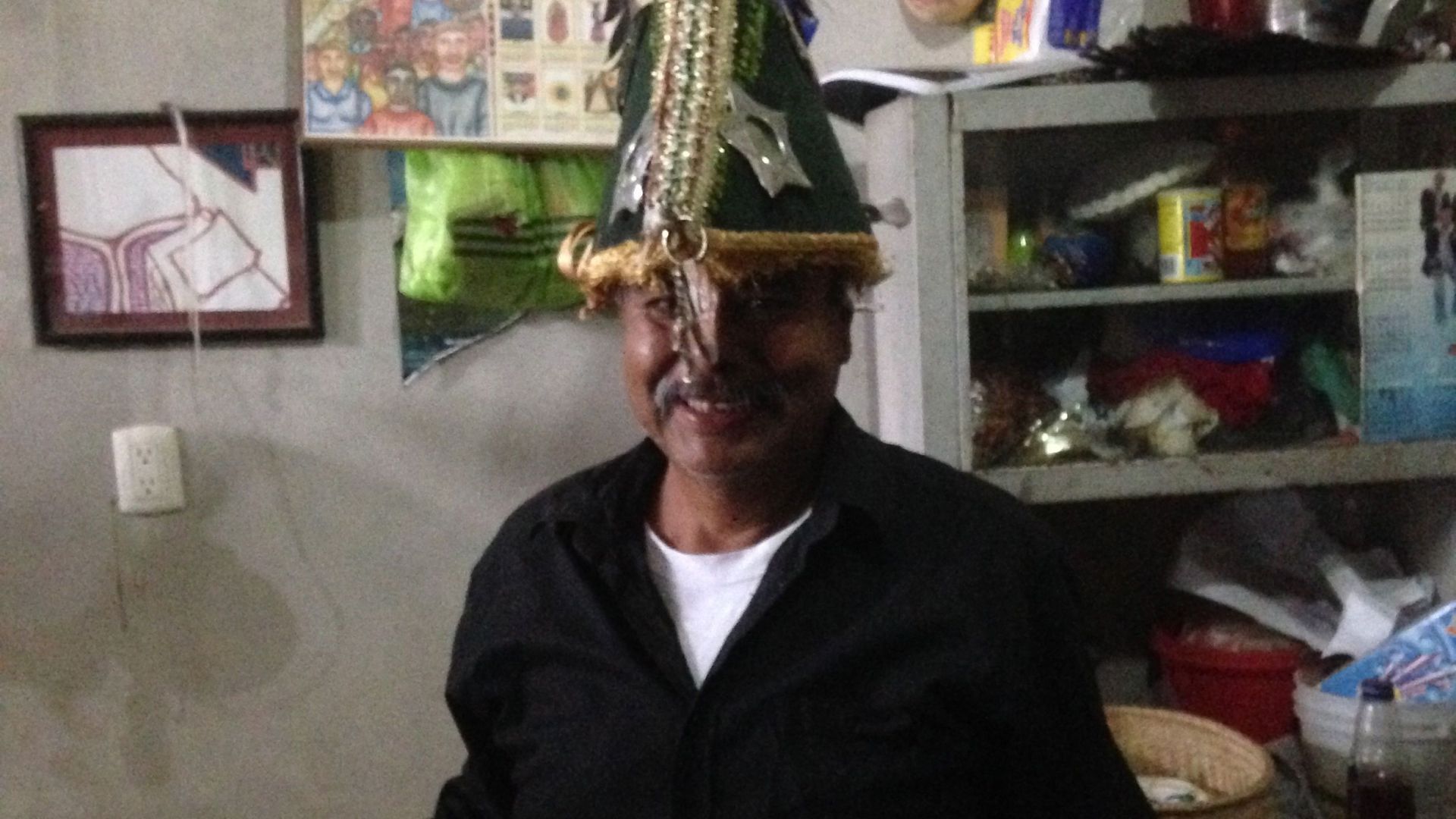 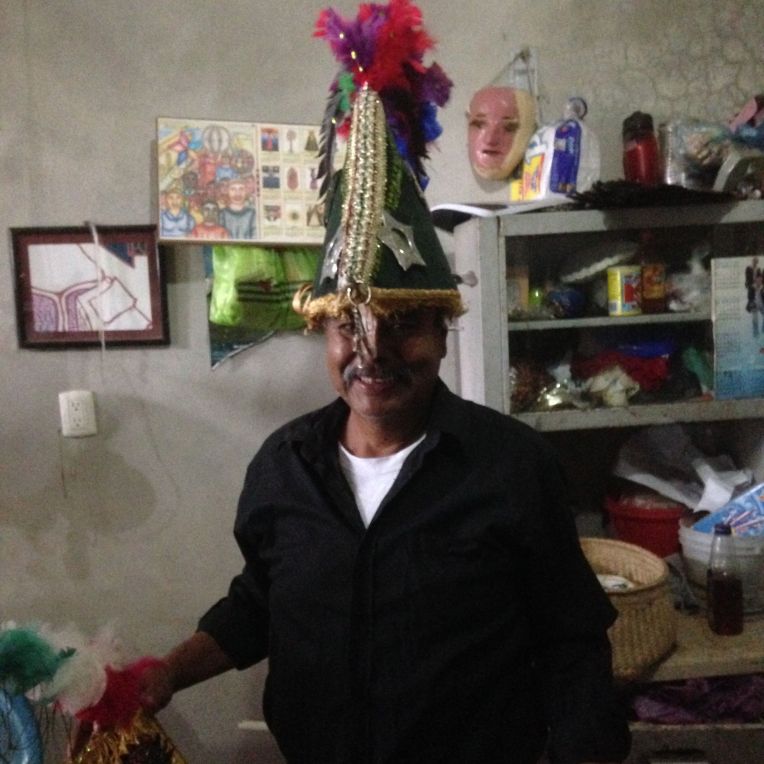 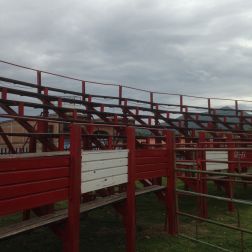 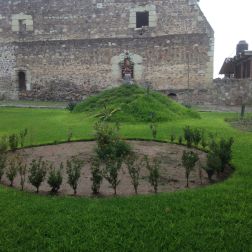 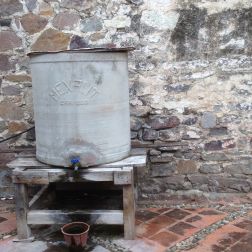 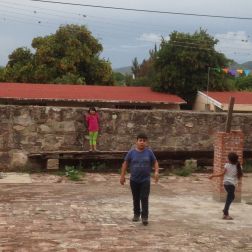 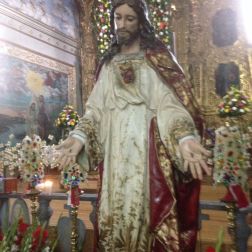 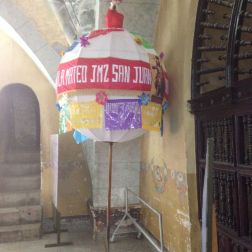 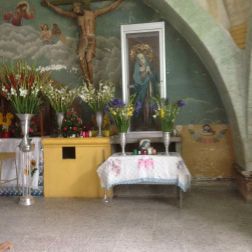 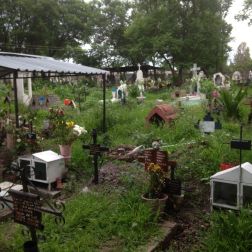 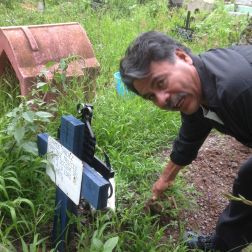 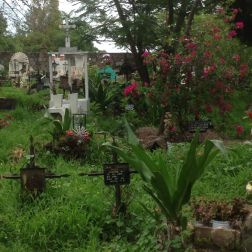 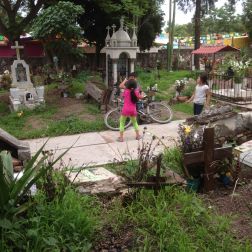 Miguel, the night watchman at the posada, invited me to his town. His directions were specific: which taxi to take, the name of the store to ask for his niece who’d be passing by about the same time I was to arrive. It was a flawless plan (in a small town). I doubt it would work back home.

The niece was sweet though she did not seem to be expecting me. She took me around the corner and down the path to her uncle’s place where I met three grandchildren, a niece and a nephew. (The niece and nephew looked as if they were characters from The Nightmare before Christmas.)

I was seated in a plastic chair outside the door to the house as Miguel cleaned up the remnants of a small fire. I was instructed to give the children English lessons to pass the time. This mostly consisted of them firing off any word that came into their minds. I was like a live Spanish/English dictionary just for them.

We went to the back yard to meet the other dog (there were two). This dog was tied under a tree because he could not be trusted with the half dozen chickens that wandered the yard.

The children climbed an abandoned automobile to fetch pomegranates and limes from the trees until the rain came and we took cover in a small work area with a hammock.

Meanwhile Miguel’s wife, Linda, was making beans and eggs and noodle soup, and cactus. I was finally welcome into the kitchen/dining area, but I was permitted no farther into the dark house. We ate a filling meal and then were off on foot(and one bicycle) to see the town.

Because of me, we became a parade for the townspeople. Some stopped us to ask questions and practice English. Two men in a van circled us four times (until Miguel mentioned their obvious actions). We were like a wreck and people wanted to see how awful the carnage was…

We were especially conspicuous as we went to the place where the rodeo was going to be held later in the day. (I would not stay for the rodeo as transportation home would be impossible, and, as far as I could tell, there was no hotel–only the covered hammock.) The cowboys stared at us as if we were cattle thieves.

We went to the church where we picked more fruit from the trees, some green oranges. They were more for play than for eating. My height was appreciated by the grandchildren who wanted more and more of the harvest.

Miguel, who had been inside a church office, returned to the tour guide role. He proudly showed me the tile he installed in the church, taught me about the town’s patron saint, Geronimo, and pointed out the candles he had purchased for the church as the town celebrated his daughter’s wedding. (Oswaldo was horrified that I did not cross myself as I entered the church; he had never met someone who was not Catholic; he wasn’t even sure if this was a real option.)

Next, we were off to see Miguel’s parents’ graves. We entered the beautiful cemetery that was green with weeds.

Miguel, slightly embarrassed by the obvious lack of maintenance, went into action as he had with cleaning up after the fire, enlisting me in weeding his mother’s side of the plot.

It was nearly 6:30PM, and even the grandchildren were tired out. They all headed home to rest before the big rodeo, and I, dirty hands and all, hopped into a collectivo taxi.

It is afternoons such as this one that I feel are the real Spanish tests. I not only arrived at a remote destination, but I was able to master most of the tasks along the way.

I wondered how to tell Miguel what a lovely day I had, so I also figured out how to use the Kodak machine at the grocery store and gave him some prints of the afternoon.

He was visibly moved to have them, but he said only: “My wife is very short.” I added, “and beautiful.” What more needed to be said?

–Herman Hesse, translated by Robert Bly, from News of the Universe, poems of twofold consciousness

Sometimes, when a bird cries out,

Or the wind sweeps through a tree,

Or a dog howls in a far off farm,

I hold still and listen for a long time.

My soul turns and goes back to the place

Where, a thousand forgotten years ago,

The bird and the howling wind

My soul turns into a tree,

And an animal, and a cloud bank.

Then changed and odd it comes home

And asks me questions. What should I reply?