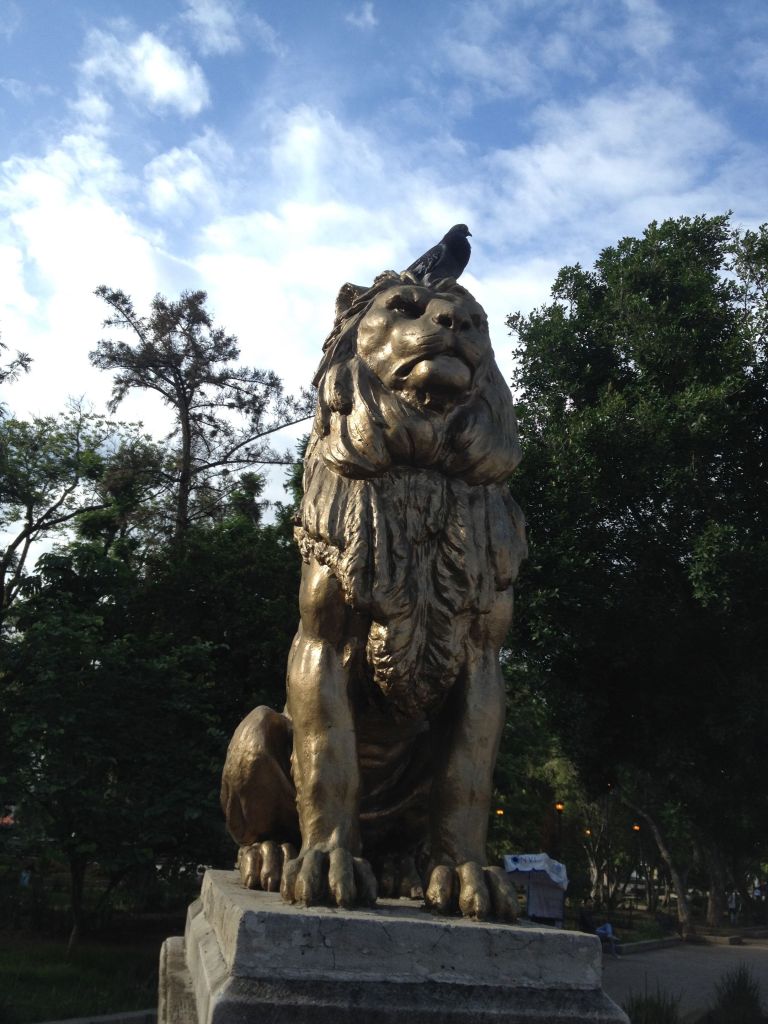 Walking laps in Llano Park, I suddenly understand where the term squeaky clean comes from. It is the noise the shoeshiners strive for as they are tending to the shoes of (mostly) men they only know from the belt down as their trunks are buried in the newspaper.

The park is all noise and commotion; even the people practicing Tai Chi add their peso’s worth to the hullabaloo.

There is a trio of awful trumpet players who improve with the arrival of half a dozen drummers.

There is a tamale vendor on a bicycle with a microphone! There are blenders at the juice stand.

There are children marching in formation and others posing at the fountain for pictures; they are synonymous with cacophony. The pigeons, too, pick boisterous fights amongst themselves, cooing throatily into each others faces.

Even this pigeon perched atop the Llano lion has plenty of babble to add.

It seems we are all vainly attempting  to reclaim our magic words.

“Magic Words,” after Nalunginq, in News of the Universe, poems of twofold consciousness, chosen and introduced by Robert Bly.

In the very earliest time,

when both people and animals lived on earth,

a person could become an animal if he wanted to

and an animal could become a human being.

Sometimes they were people

and there was no difference.

All spoke the same language.

That was the time when words were like magic.

The human mind had mysterious powers.

A word spoken by chance

It would suddenly come alive

and what people wanted to happen could happen–

all you had to do was say it.

Nobody can explain this:

That’s the way it was.

One Reply to “Searching for Magic Words in Llano”