I went to see Lucha Libre (wrestling entertainment) at Pepe Cisneros Arena with three other ladies who were unfamiliar with this sport. The scene was fascinating and made me want to know more about what I was seeing and hearing.

I was surprised by the graceful gymnastic abilities of some of the wrestlers and the power of others.

I was impressed by the heckling banter between the announcer, the wrestlers, and the crowd.  It made me want to know what I was missing.

Most of the evening’s antics were clearly choreographed interactions, but one was too real.

There were six wrestlers, three on each “team,” battling.  Five of them had landed outside the ring following a series of skirmishes.  Only The Zombie, an athletic acrobat in purple, remained in the ring.

We watched as he sent himself off the back rope like a slingshot.  Instead of going over the top row and diving into the crowd, he sailed through the rails and slammed into a metal rail.

He crumpled on the ground, seized a couple of times and then was still.

We decided to head out as the paramedics carved a path through the silenced crowd. 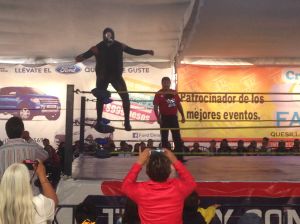