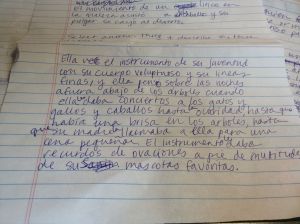 She tells me to pick one.  I pick the only one I cannot name: knot.  The word for knot is nudo.  I think of desnudo: naked and ask if they are connected.  She says she’s never thought of them as connected.  I think being naked is certainly being without knots.  She says:

1. Describe the thing realistically.  Describe it physically and essentially as if you are making a definition.

2. Tell readers what it is and what it represents for society, the world.

3. Tell readers what it reminds you of.

Someone crosses the lines

of a single piece or several

strings of fiber to connect

them together or to fix

something in its place.

A knot–in traffic, in hair, in a

thieves, dogs, the knot is a jail.

For some, also, the tight knot

of the marriage lasso is jail.

when we were (much) younger,

we were always riding horses

and running the desert’s dunes.

Dawn fixed the knot of her lasso

on her left thumb. The movement

of a bobcat in underbrush spooked

her horse and her thumb fell

to the desert floor.

Okay, next task. I needed to pick another card and do the same thing but with some more metaphor (which was prohibited in the first; oh, how I wanted to use a bellybutton!)

I chose the violin.

She sees the instrument of her childhood

with its voluptuous body and fine lines,

and she thinks of nights outside under

the tamarisks when she would give

concerts to the cats and chickens and

until there was a breeze in the trees,

until her mother called her in for a small

dinner. The instrument delivers her

memories of the standing ovations