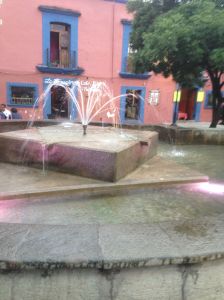 The Little Businessman and Co. shed their gum and cigarettes for awhile, and we went for a walk in the dark: Agostino, Julio, Cecilia, Marisella, and I.  The two boys rain and jumped and kicked each other and tried to trip all of us.  As usual, people stared at us though it was already dark.

Agostino led us to a fountain where he promised to show us a great feat. I was nervous as I am not usually entrusted with the majority of company without parental supervision, but we followed anyway.

Agostino, at first, had us sit on the side of the fountain, a cool bench (especially since it had been raining).  The fountain was off for the night, and before I knew it, Agostino leapt to the center of the fountain, a large square that was a new stage for him.  He performed a bit of a show to our round of applause.

And then he looked across the deep chasm of the fountain still filled with water.

The ledge we were sitting on looked far away and was so much narrower than his stage.

He playfully called out to me to help him.  I did not know he was serious until his voice changed and I looked at his eyes.  He was scared.

“Help me,” he almost wailed. And, I got scared.  I could wade in and carry him out, or I could do something far more ridiculous.

I stood on the ledge, legs slightly apart and reached as far as I could over to him.  He grabbed my hands.  I pulled hard and he sailed at my shins like a six-year-old cannon ball.

By this time, a man had left his date on the park bench where he’d been sitting.  He had to see our show.  Having an audience didn’t help much — except maybe there’d be someone to call an ambulance when this all went wrong…

Agostino hit my legs with an incredible force.  I remained on the ledge (certain to bruise).  He remained in my hands.  Dry. Our spectator practically applauded.