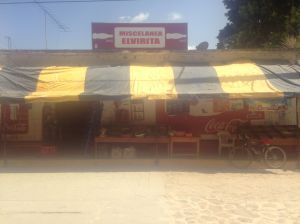 We started a unit on food in English class. The students have a new constellation of words: milk, eggs, bread, candy, sugar, onions, carrots, potatoes, and so on. They like fruit the best, and so it was easier to give them grape, strawberry, kiwi, orange.

In part because I have a rambunctious crew and in part because I had not been able to secure play money and fake fruit for our own shopping game, we walked to the town’s two “convenience” stores together to see the words for ourselves.

The activity started out as a karate chopping and roundhouse kicking extravaganza in the store of Oscar (not one of my students) and Cesar his brother and their parents because Asuscena has a crush on Oscar.  And, Samantha tried to tell Oscar. Serious madness ensued. The father of the boys seemed to understand what was going on and did not even comment on the small disruption.

Hannia and Ariadna didn’t want to be associated with us at first. David kept asking me to loan him a peso – or, better yet, a dollar.

If you were watching, you would swear they weren’t learning a thing, but I promise they could say beans and rice and watermelon and garlic and ended up staying ten minutes after class.

We also tried musical chairs. It looked more like an episode of Jerry Springer. I predicted there’d be chair throwing. It wasn’t hard to see that coming. I did not foresee the lucha libre exhibition—though I should have. I ought to just give them masks and let them go at it.