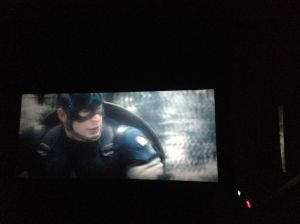 I went to Oaxaca’s newest commercial plaza, also known as mall, called Macro Plaza. It was surprisingly similar to US malls. It had a food court, some department stores, and a movie theater. It also had Wal-Mart. I strolled the whole two stories of this “development” to see what it was about. However, I could not find the movie theater. I peeked into Wal-Mart and asked the lady taking backpacks where a movie theater is. She offered directions and quickly told me I’d do better if I got in a cab and headed down to Cinepolis (where I usually go).

I inquired why go across town when I was right there. She was happy to explain that Cinepolios has many advantages over Cinemex: better seats, better food, better sound, better cleanliness. I thanked her for the warning and decided, despite her good advice, to see for myself. She was right.

The funniest part is that I had to pay 20 pesos more to see a movie in this dirty new theater. I realized a couple of minutes into The Avengers that not only had no one cleaned the theater I was in, neither had they met me at the door to take my ticket – and, the reason I paid more, give me 3D glasses. I spent a couple of hours as one of four people (all without glasses) watching a blurry and boisterous movie.

I should’ve gotten in the cab and headed across town.