I started this story by saying there were fish for sale at the farmers’ market–and mice.  And, M stopped me and said, “Wait, mice to eat?”  And, I realized I should have said goldfish and tetras, so I clarified.

The rest of the story is that a mom decided she wanted to hold the mouse to show it to her two-year-old son.

The boy was not as enamored with the mouse as she was.

A young guy interrupted to ask whether they had mouse food in addition to fish food.  The salesman explained that he could get some grains and veggies from one of the other market stands.

And, the mouse struggled to escape the mother’s grasp.  He finally dropped dramatically to the pavement, landing on all fours.

The mom feared for the mouse’s livelihood. The salesman promised, pantomiming for me (in case I did not understand Spanish), that he fell on his feet (he showed us the palms of his hands) and not on his head (he pointed to his own head).

The mother decided that instead of grabbing the mouse, she’d hold her son up to the aquarium holding the mouse.

He squirmed just as the mouse had. 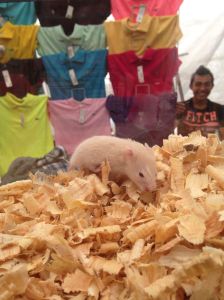