This mural is being produced by an artist named Jobe. He was happy to permit photos and to let me witness his process.

As he spoke, he spoke English clearly and interrogated me as much as I him. In fact, upon learning I live in Sacramento, he offered that he has a large mural in Davis. He told me where to find it (near Monsanto). I told him I’d check it out.

Many places are commissioning murals to cut down graffiti. We need more beauty such as this. 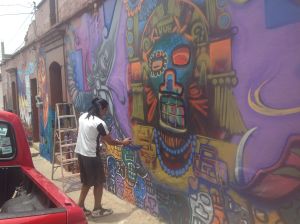 One Reply to “It’s a small world…”