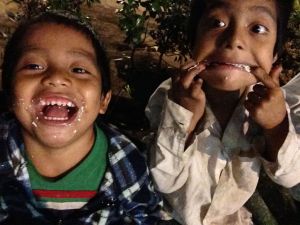 Last night the inspectors came three times to run the gum sellers and other vendors off the zocalo. Each time they approached us, they wanted to know (but didn’t ask) what I was doing with them and why these children were playing with cell phones. But they just swept us away into the night, making disparaging comments about people who leave their children to work in the streets. To clarify though: Rosita had been with them all night, is always with them every night — until the inspectors come. She does leave the children when the inspectors arrive, but she does so only because it is far more likely that they’ll penalize her than one of the children.

So the upside was that we had more time to sit together and chat and practice taking photos.

On Cecilia’s turn with the camera, she only took videos to capture small clips of Julio screeching (something he was happy to do). She took at least forty videos, each no more than a second long.

On Julio’s (pictured left) turn, he and Augostino (right) wrestled for control until they found the function where they could see themselves as in a mirror. They tried on all sorts of funny faces before I reached over and snapped this one. They didn’t even know I did it as they were already testing another and another silly expression.

Mateo hoarded the other phone, listening to some music I had, asking me if I really like songs like that (folk) while taking at least ten snapshots of my feet and as many of his legs and even more of the cup of corn I bought for him. At home, downloading the shots, I couldn’t help but be impressed by these little artists.