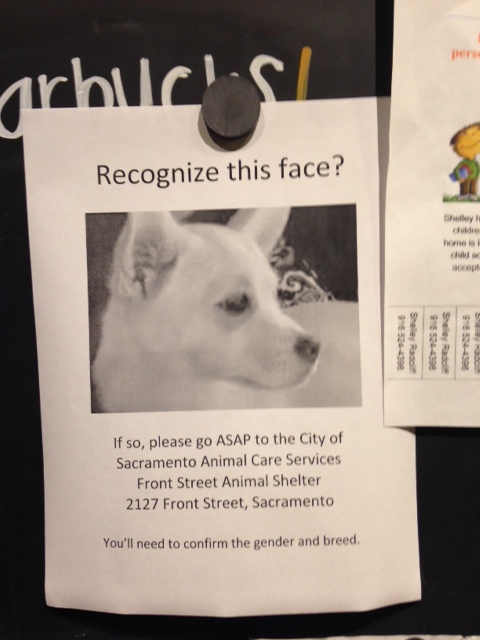 On Friday I had five more essays to grade, but I decided to head to the local coffee shop to get a latte before I finished the task. As I walked in, I noticed a small chihuahua-like dog skipping around inside the cafe. She zoomed out the door, into the parking lot, and back in the door again.

A woman at a table commented: “My Friday’s gonna’ be ruined if someone runs over that dog.” I asked the person in line of front of me: “So this is a stray dog?” She said she was. I asked if anyone had considered taking her to a shelter. It was a novel concept.

So, skipping my coffee, I scooped her up and took her to the Front Street Animal Shelter.

She sat on my lap the whole ride there, licking my hand, looking into my face, and smiling into the Facetime call I initiated with M to show him how cute she was
As I was driving and talking, she licked my face and I moved my head in the opposite direction so she licked the other side and I twisted the other way. It was officially a game! A dangerous game. (I was still driving.)

When I arrived at the shelter, the man at the counter asked me if I was sure if I didn’t want to keep her. I agreed that she was adorable. He said she’d be on the website within two hours and would likely be adopted by the end of the day. If not, he was taking her.

I went home and made a poster for the bulletin board at the coffee shop, and I returned to get the latte I had originally set out for.

As i was in line, Lucy Liu’s “owner” saw the flyer in my hand and asked me why I had a picture of his baby.

He pulled out his phone to show me a photo of her tucked safely in bed.