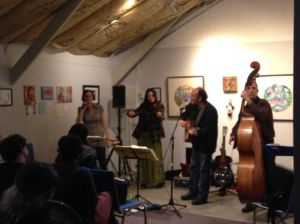 Saturday night was the Second Saturday Art Walk in Sacramento; it was also a rainy night. Instead of walking about, we headed to the Poetry Center’s artists who are writers exhibition, reading, and book release. The gallery was packed, and an hour into the reading, an intoxicated woman entered. She had a whole bottle of wine in a paper bag, wore sunglasses — sometimes on her face, sometimes in her hair, had a way of greeting people coming and going, and also couldn’t control herself from fidgeting, singing, commenting in odd places at a high volume.

I was pretty sure she was a regular at the reading series as the Poetry Center can be counted on to welcome almost anyone.

Several attendees were slightly bothered by her outbursts, would look in her direction with a hot glare.

In the middle of the band’s rendition of “Clair de Lune,” the woman in sunglasses knocked over an anthology perched on a stand and tried three or four times to re-position it. Her fingers were too twitchy and she kept snapping the stand onto the table.

A man, ignited by the sound, grabbed her by the arm and headed to the door, but most of the rest of her did not come, so he grabbed her hair, too. Still, she did not fly out the door with the ease that he expected. Instead, she toppled; her head crashed into a pillar.

It was at this moment that the band realized that something else was happening in a corner of the room, and everyone stopped in time to see the woman pop back up.

Yelling, “That’s assault; I’ll show you assault,” she charged the man, and they both thudded against the door.

The man next to me called 9-1-1. The woman went out the door with a fire extinguisher. Someone quickly locked her outside.

The rest of us were locked in, locked in a state of mild shock at what had gone down in such a short amount of time. The band’s time was up, but they played on, serenading us with Woody Guthrie lyrics that promised, “oh, you can’t scare me…”

In the pouring rain, the woman struck the door, the window, and the wall with the fire extinguisher.

The band ran out of songs. A bored man unlocked the door, letting the woman in and a stream of us out the door before the police finally arrived.