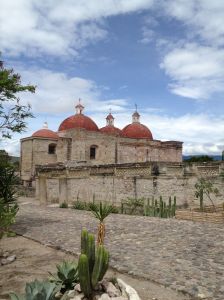 The other night on the Zocalo, I met a very nice woman who owns a mezcal distillery and storefront in Mitla; she asked if I would consider stopping by. I told her I’d try.

Consequently, when S- suggested going to Mitla for Sunday, I was happy to tag along for the ride. Jumping off the bus at the center of town, we took a moto-taxi to the ruins. The weather was gorgeous: overcast, breezy, perfect for climbing up into the sky.

After the ruins, we did a bit of shopping at the stands that abound at almost every point of interest.

We peeked into the church which was in session, people praying all around us.

Then, we went to the Mezcal distillery where the husband of the welcoming woman immediately recognized me. He had us sample more than ten capfuls of his special elixir.

He sold me on one of the sweeter and smoother versions that must be refrigerated, and he even sealed the bottle with a hairdryer-like tool right in front of us.

Then S- and I decided to climb another set of stairs to see what we had thought was a church, but it turned out to be a barred building with three crosses and a noisy rooster inside. It appeared that people left offerings, flowers, notes, candles, and bottle caps just outside.

After looking in at the cock-a-doodling rooster (whose talons had been clipped), we turned around and looked out over the town; we could see the ruins, the church, the endlessly mesmerizing summer sky. 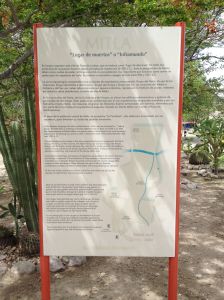