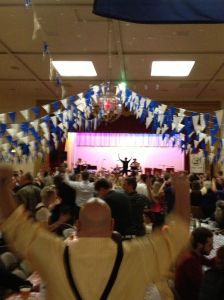 I mentioned that I had the chance to tell Bradley (in Seattle) about the verb: yodel. One week later, thanks to the invitation of Kerstin, the woman pictured below in lederhosen, at the Bockbierfest in Sacramento, I was witness to a yodeling contest. It was pure delight, even (or perhaps especially) when the intoxicated attempted to do it.

The music and twirling dances reminded me of learning to square dance in sixth grade, especially as I saw girls dancing with girls and boys with boys. It is so much easier sometimes to just have fun.

We had so much fun that M, more than tipsy, insisted we never miss one of these.

We were among the last people leaving at the end of the night. As we made our way to our car, a young man offered to pay us ten dollars to help him and his two pickled friends to get their car to someplace for the rest of the night, so they could wander home through the cool streets.

Parking them in Safeway’s lot, I wouldn’t take their money even though the seatbelt didn’t work, and the stick shift was stubborn, and one taillight was out.

The next morning, when I went for groceries, the green Bronco was still there. 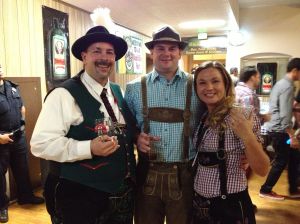