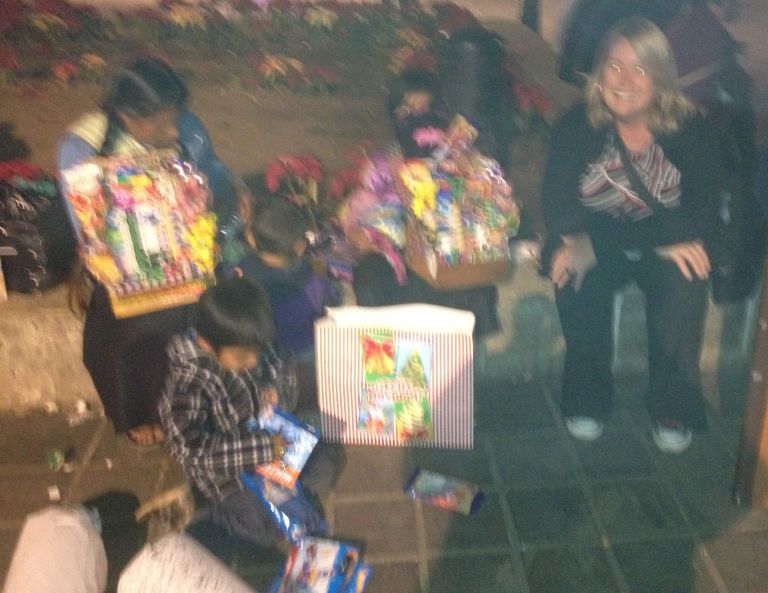 Yesterday Mari said, “I noticed you still have those Christmas gifts in your closet for Augustino.” I sadly said that I was not able to find him although we had made a date two Fridays ago. She said that I would see him last night, and I did.

When I first arrived on the Zocalo, it was too early for them to be on the corner I can sometimes find them. I knew this, but I looked anyway. I decided that dinner would be a good way to wait for them. After all Mari said he’d be there.

Carrying a tiny basket, all pastel colors, he was now a gum seller and not just a peso demander. Sure, he was new to the business and so he was only given two pieces of gum to try to sell, but he was now an official businessman with a real product.

He looked at me and said he’d rather have a bottle of water than an ice cream cone, but of course he’d prefer both.

His sister Cecilia saw him with a strawberry cone and a bottle of water, and she came over to collect her scoop: Neopolitan.

Of course, I did not bring the gifts, so I had to run home to collect the bag of goods and hustle it back down before they headed home for the night. Cecilia said they would be on the corner in a half an hour — for sure.

M tracked Augustino down as I presented Cecilia with a doll. She had long red hair, sparkly earrings, and a pretty pink dress. Cecilia said, “She has earrings.”

She quickly placed the doll between her candy and her chest, to protect it from the older girl who approached asking where her gifts were. I tried to explain they were gifts for my friends. She was willing to be my friend.

Cecilia explained that they had not met me two Fridays ago because someone had grabbed all of her candies as she was sitting on the wall. As a result, she only sits on the wall when her mom is there. Otherwise, she keeps moving (and is harder to find).

Augustino got a tub of Playdough and three cars with a ramp and a helicopter (he called an airplane). He seemed to love flying the “airplane” all around the zocalo and shared his cars (except for the fast blue one) with a smaller boy.

I was sitting on the brick wall mostly assuring Augustino that these were his toys and candies when Mateo, his older brother, came for a break. I presented him with a Rubik’s cube, and M showed him how to use it. He seemed afraid to mess it up. And, though it seemed odd to give candy to people selling candy, Mateo seemed especially interested in the Pinta Fruit, gel candy from a pen and candy paper to write on.

I was watching Augustino fly his helicopter as Cecilia sitting next to me looked her doll in the face and said, “She’s so beautiful.”